This pumper truck showed up about 6am to get set up for the day. I walked up to the parking lot and it looked like an alien spacecraft had landed. Everything was dark except for its headlights pointed towards the building. All I could see was the silhouette of this truck with its four support legs stuck out on either side of it, that long tube extension sticking up in the air, and eerie beams of light wafting out around it. And then I had to go to work. That was my only personal experience with this day.

James Fyffe spent a good portion of the day on the phone with the concrete company, doing his best to get a truck here every 15 minutes to keep the job moving. 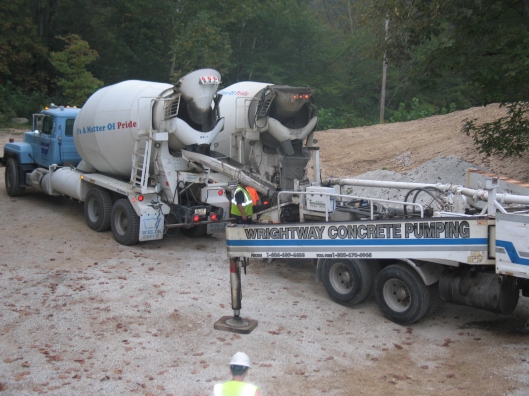 The message on the concrete trucks amuses me.

It could possibly be directed at kids like Kris here. Taking off school to watch concrete dry. Although… He may just be the happy genius of the household – he’s definitely got the best view of the whole process.

Dan Hilty and Wendell Slagell. This is not a new process for them.

These guys. I just ask myself… Why are they even here? Are they crazy? Why would they do this? They’re slaving like Israelites in a heat wave. It was seriously hot. And humid. And pretty much all-around miserable outside. And they’re volunteering their time. I don’t know how to tell any of them thank you. Except…. thank you! I appreciate each of you so much!

Nobody will ever see these again!

The brains behind the operation- Bruce, James and Jim. These guys are in it for the duration. It’s so good to consistently have these three here through this project

Clete Yoder – taking measurements of the building, which turned out to be a very, very important way to spend his time just then. He’s pictured here marking the locations of the steel plates which will support the beams for the second floor.

The last step of this project (and I didn’t get a very good picture of it) involves these braces. After the concrete was starting to harden, Bruce and Kris (who did a lot more than sit on the swing and watch everyone work!) went around to each brace and adjusted it to straighten the wall. Sometimes it took 20-30 twists of the yellow support beam to either push or pull the steel braces to plumb. 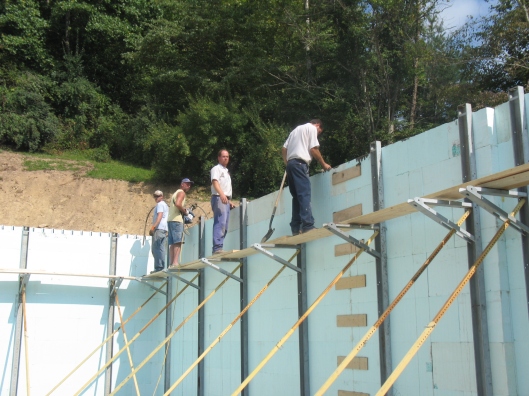 Finally. The concrete is poured, the walls are straight. “Everyone off!” They can leave it to harden, and sit down for a break. Marie and Loma are treasures and these guys know it. These ladies feed us well and never complain. 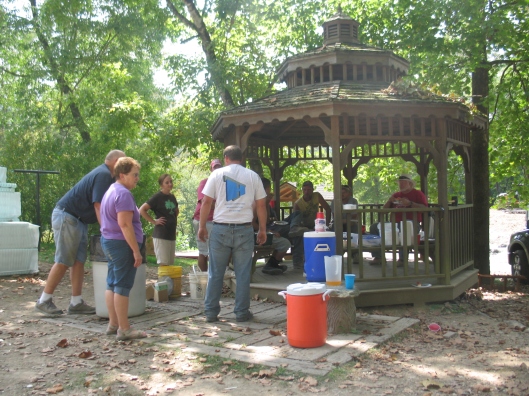 Jacob and Christian Short. Their brothers Samuel and Jonathan were here to help pour the footers earlier this month. Four more people who we appreciate more than words can express.

Can I tell you a story about this next picture? I may get some of these facts wrong, but this is how it was told to me. Wednesday in the middle of the night, Clete woke up thinking about the building plans; he was sure something wasn’t right. Long story short – his measurements of the building didn’t match up with the measurements of one of the steel beams on the architect’s plans. Early Thursday morning, they called the steel manufacturer in Maryland and pointed it out to him. He realized Clete was right; there had been a communication error and a beam had been sent out that was a foot too long. He called his driver who was 30 minutes down the road; the driver turned around; they cut the beam to size, welded the phalanges on the end, repainted it, and sent the driver on his way again. If Clete (whose former job was drawing architectural plans) hadn’t caught the mistake when he had, we would have received the wrong item, and the process would have been much harder to correct here at the job site. Talk about a company that goes the extra mile to deliver a quality product! We’ve been amazed at how God has brought the right people at the right time to this project.

We’re hoping to set these beams in place this coming Tuesday – September 17. The steel trusses will rest on top of these and need to be welded down. Right now we have a couple welders who have volunteered to help the weekend of the 21st, but we could use some welders and/or welding trucks earlier in the week. Are you a welder? Do you know one? Your help would be greatly appreciated. We’ll feed you well, give you a bed to sleep on, and supply you with gatorade and sweet tea.

Counting down the days till…